Getting to create films with people I admire is a dream come true. And when those films are nominated for awards, well that's just icing on the cake! I'm so grateful to Brightside Tavern Film Festival for nominating by newest film, "The Question," (Directed by Larry Rosen) for awards in three categories. Those nominations are "Best Actress," "Best Short Short," and "Best Short New Jersey Drama." In addition to nominations for "The Question," we've also received nominations fo 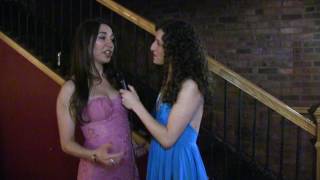 Secrets of My Film Characters Revealed

I love film festivals, especially when I get to chat with my friend and co-star Bethany Nicole Taylor on the red carpet! Check us out at the Bright Grove Screening Series as we reveal insights about our feature film "Death at a Barbecue" and my short film "Last Call," (both directed by Larry Rosen). After you watch, I'd love hear your thoughts on what types of characters you could see me portray. Leave a comment below with your ideas!

Have you seen my first national commercial? (33k views!!)

Wildcrafting + homestead gardening + going OFF-GRID | Living in a one-room cabin in the woods!

An open letter to concerned citizens

Here's the trailer for my newest film!!

Announcing the worldwide premiere of Maturing Youth!! (+ a special offer for you)

Watch the official trailer for the short film Maturing Youth!

Behind the scenes of another commercial + a new performance date!

Here it is: my newest commercial

Have you seen my first national commercial? (33k views!!)